Yesterday I decided to take the day off of work and not because I was sick, but because I was worn down in a lot of ways. And then in true B fashion, I immediately started feeling guilty about it all day. I kept thinking everyone else at my job is tired too, but they aren’t staying home. Everyone else at work has worked longer hours than me and they showed up. I am being an emotional woman. I am being a silly woman. They are so much better than me. They are pushing through.

But sometimes I don’t think we should just push through.

Sometimes I think we need to purposefully stop what we are doing and take a breath so that we can make sure we are going the right direction.

I have struggled so much with what others are going to think of my decisions. When I say so much, I mean so much it eats me alive. I lay awake at night worrying about what I could have done better or what I could have said differently. I go into every situation with hesitation because someone could think I’m making the wrong move.

And I know I’m not alone.  I know some of you are feeling this too.  So let me tell you something.  It’s ok to assess the feelings of others when making decisions. It’s really good to do that, but when the opinions of others rise above God’s voice in your ear, it becomes a sin. When you get so wrapped up in obeying the demands and meeting the emotional needs of those around you, you are acting on behalf of yourself instead of truly being a woman used by God. You are not trusting God to be God. Believe me, I know this is true because I’ve done it.  I’ve lived it and called it God’s work. But it’s not. I realize that now and want to tell you it can get better.

I saw this shirt worn by one of my favorite speakers and servants of God, Christine Caine, and knew I needed it. I don’t always live up to these adjectives, but I want to try harder. I want to stop being so afraid of the voice God has stirred up in me because someone may not be ready to hear it. Thank you to my girl, Cassie, for making me my own version of this shirt to remind me that there is so much freedom when we give ourselves a day off to see where we are. 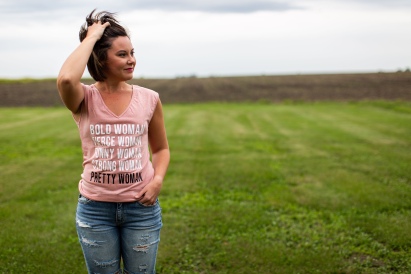 One thought on “A Willing Woman”