My running started in high school cross country. I ran cross country because high school boys. I hated running actually. And my plan was quickly foiled as no boys were impressed while they waited on the bus for my running partner and I to finish our first race. Even our parents had gone home. Forsaken us as lost runners, most likely to ask permission to quit cross country the minute we arrived home that night. But my parents are those wise kind of people that don’t let you quit things that are good for you. So I finished the season and tried to learn something. I learned it would be best to not sign up for cross country again the next year.

My dreaming started out like the dreams of a lot of little girls. I dreamed of being a singer, a writer, and then of course, Miss America. So fancy and attainable. But it wasn’t long until my voice was muffled by the opinions of people I thought were important. Then all the words I tried to write came out cattywampus on notebook pages. And just like that pageant crowns were being placed on the heads of other girls.

Now I’ve found what I was missing, GRIT. 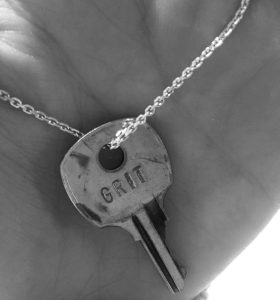 I didn’t have any fight in me. No dirt on my knees from crawling to a finish line. No hoarse voice from making them hear my songs. No tear stained pages from pouring out my heart with words that I fearfully felt. All I had was a notion that I needed a platform, a stage, and a crown to be who I thought I was supposed to be. I was running with no determination. I was dreaming with no doing. And I was standing on stages where I didn’t belong.

Now, Grit says I run miles and miles on country roads just to see how far I can go.

Grit says I sing songs to the beat of my own heart, to lift my head, so my blood bought crown stays straight.

Grit scares me. Grit means I might have to put in more than I get out sometimes. Grit means not giving up when I just want to quit running against the wind. Grit means tasting the gravel and the dirt that people cast on me, chewing them up, and having the tenacity to spit them out every time.